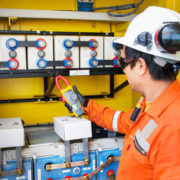 One of the worst nightmares any business has to worry about is a possible electrical systems failure. Not only does an electrical outage slow down or completely halt production, it could lose the business money or, more importantly, put lives at risk. In order to prevent these failures from occurring, you need to know what happens with an electrical systems failure. If you don’t know the causes, then you won’t be able to know how to fix the root of the issue.

Not only will production likely shut down when electric systems fail, a real possibility of fire and explosion exist. Anyone near the source of the electrical failure will be at risk of serious injury or death because of the explosion or flying debris as a result. The best way to protect employees from this is to conduct regular thermal imaging electrical inspections.

What to do When Electrical Systems Fail

The first thing you should do when your electrical systems fail is to order an electrical infrared survey. This survey will be able to identify the root of the issue and can help to detect any other potential problems. Once all of the problems are identified, the faulty components can be fixed.

The best way to prevent electrical systems failures in the future is to conduct at least an annual infrared electrical inspection on all components in the facility. Not only will this ensure your business won’t experience any shutdowns, but you’ll also be keeping your employees safer.

Infrared testing is critical when it comes to electrical safety. You can do your own testing throughout the year, but no human can see what an infrared test can see. The best thing about infrared electrical testing is you don’t have to shut down your facility to run the test. A professional can come in while production is still happening, so you won’t have any down time.

At Infrared Consulting Services, we strive to keep every company safe from electrical systems failures and other potentially dangerous issues. Whether you’ve had an electrical infrared survey conducted at your facility or not in the past, be sure to contact us to learn more and to schedule a survey today.